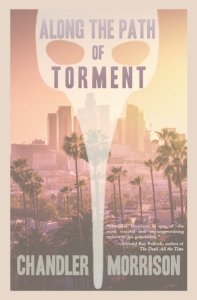 “Chandler Morrison is one of the most visceral and uncompromising writers of his generation . . .”
—Donald Ray Pollock, Author of The Devil All the Time

Ty Seward is a sick man. Anorexic, sexually aberrant, and haunted by a ghostly apparition residing in his closet. Living in the shadow of an in-remission cancer he fully expects to return, Ty bitterly earns his meager living by working as an assistant to his uncle, a business-and-media mogul who runs a lucrative prostitution ring catering to the Hollywood elite. When Ty’s line of work introduces him to a precocious teenage girl who seems to possess a shrewdly keen insight into his inner machinations, he is forced to confront his hidden demons and repressed trauma, embarking on a bleak and harrowing odyssey of self-discovery in the decomposing City of Angels.

Advance Praise for Along the Path of Torment

“Along the Path of Torment is a brutal, stylish, and compelling book, with moments of surprising tenderness. Morrison dials up the noir and writes his characters with careful attention to what haunts them. Like a Bret Easton Ellis novel that refuses to fetishize the toxic glamor of LA and its shadow worlds, Along the Path of Torment is memorable and intriguing.”
—Lindsay Lerman, Author of I’m From Nowhere

Along the Path of Torment is a masterful odyssey of Hollywood decadence and depravity, an unflinching and often morbidly hilarious plunge into the void as Chandler Morrison explores the harsh truths of power in an increasingly soulless and decaying world.
—Ryan Harding, author of Genital Grinder