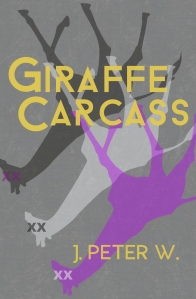 Lacey lost her mother to cancer. Now, Lacey and her father are just trying to survive the sadness overwhelming their house. Neither one is coping well. When it feels like things can’t get much worse, a dead giraffe appears in their backyard. They call the police to dispose of the carcass. The following day another giraffe appears, also dead. Every day, it’s another rotting giraffe.The police and neighbors all think the father, Richard, is to blame. He is, after all, walking around with his dead wife’s urn, talking to it like she can hear him. Lacey isn’t so sure. She knows her dad might be losing it, but thinks the weird, old lady who’s always warning about the zombie apocalypse could be involved. Together, Lacey and Richard need to figure out how to make this rain of giraffe carcasses stop before the strain of this surreal nightmare shatters whatever hope they have left.